Yes, we’re on the verge (my new mission statement) 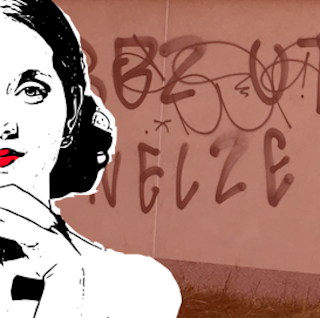 On the verge of what, though?
On October 4th, 2019, when I wrote my first post, this blog had a simple premise: To write openly about my life as an aspiring performer. My first post began:

Stories about aspiring performing artists always end with the protagonist making it. There's always a big break, some big shot who reaches down and plucks the young performer from obscurity, or an unexpectedly triumphant performance that reveals the protagonist's uncontainable talent... The truth is, most young performing artists never have a big break, never "make it" in the conventional sense. What are their stories about?

It’s almost a year later, now, September 13th, 2020, and I’m not as concerned, anymore, with my own success within the classical music industry. This shift started before the pandemic, but the pandemic certainly helped expedite my realization: That I don’t actually wish to seek the approval of the establishment. That I wish to create my own scene, my own stick, so to speak, by which to be measured, and, eventually, perhaps even be one of many ushering in an alternative to the operatic establishment.

That, then, is the new desire at the heart of this blog and the YouTube channel I launched tentatively in March, having filmed my first little video in February before I knew just how convenient a side-project making videos would be in lockdown. As of this writing, nearly a year into my parallel life of online content creation, I am not exactly an influencer by the internet’s standards (though, just like the establishment, the internet’s standards are not what I aspire to) but I have connected with all sorts of people from in and around the field of classical singing, many of whom I may never meet in person but whose stories and words of support have meant a great deal to me.

One thing that has not changed since launching my blog and, later, You Tube channel is the fact that I feel I am speaking from a metaphorical verge, though that verge has taken on different meanings. In the beginning, I imagined myself to be on the verge of a make-or-break turning point in my career, on the cusp of either sudden breakthrough or irredeemable failure. Moving on to my You Tube channel, I felt the verge was more global, that even as we make art, even as we imagine and re-imagine the history of art, civilization itself is balancing on the precipice of natural disaster - on the verge of a future we can't imagine. There is also a less grandiose but more hopeful meaning to being on the verge: To be on the verge as an artist is to give yourself over to the uncertainty of creating outside of the confines of a traditional career.

I will say this: As the daughter of the Velvet Revolution, which marked the end of the communist regime in Czechoslovakia, I may be particularly sensitive to how, after hopeful social shifts, things tend to sneakily slide back into place, under new guises, new ideologies. However, it is also precisely now, of all times, that I have discovered an intensely idealistic side of myself: I am a total believer in the power and value of art. Unfortunately, the word “art” seems to have taken on an air of the removed, irrelevant, and even somewhat ridiculous – an inscrutable abstract sculpture guarded within the walls of a minimalist gallery or some slog of a performance piece one must watch with a straight face even if it is, in fact, an unendearing example of what Susan Sontag would call “pure camp.” I, too, was seduced by the idea of “high art.” Why else would I have chosen opera?

Parsing the very idea of high and low art, and what it means to me, is merely a personal goal. Then, there’s a bigger goal: I wrote a blog post in which I said that one way to hold the opera industry accountable is to create a truly thriving indie opera scene as an alternative to it. Cultivating the skills and connections to do so is my new mission, which I intend to chip away at slowly and steadily.

Near where I live, in a residential part of Prague, graffitied on a block building, is the phrase: Bez utopií nelze žít. “Life is impossible without utopias.” It’s been there for years and, for years, I've felt vaguely put off when I walked by it. Maybe the fact that it speaks to me now is a sign that I’ve hit rock bottom. My utopia is one in which making art is not controlled by gatekeepers, or wealth, or even algorhythms. It is a true utopia in the sense that, as far as we know, it cannot exist. But, right now, I do need it to live. 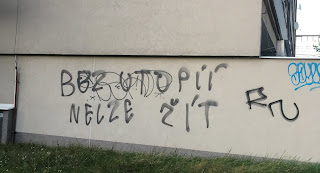 So, here’s to still, and always, being on the verge.