The Perils of Zoom Auditions 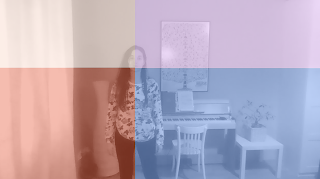 Virtual auditions used to mean sending a link to a pre-recorded video. The idea of auditioning online live from your own living room is definitely a brainchild of the pandemic.
I participated in a Zoom audition recently, mainly so that I could glean info about the process which might be useful to other singers. In this post, I would like to demonstrate, using actual clips I made on Zoom, what you need to consider before doing a Zoom audition.
The instructions I got from the organizers of the audition* was that all one needed to participate was a computer/smartphone and an internet connection, though using an external USB mike, they admitted, is preferable. Turns out it's a little more complicated.
If you are going to do your audition from home, you should own a piano and have someone to accompany you. I've heard it's actually better on Zoom to sing a capella than to sing with a pre-recorded track (the latter can lead to pitch issues on the receiving end). I have an electric piano (the kind that sounds about 70% like a real piano, with a nearly full dynamic range) and a boyfriend who can play about 70% as well as a real pianist (I kid, I kid). If I didn’t have those things I would simply not participate in a Zoom audition. But that’s just me. Apparently, there are ways to make a pre-recorded tracks sound alright over Zoom but I cannot speak to that from personal experience.
Here is my biggest piece of advice: Record yourself THROUGH ZOOM before the audition. In fact, do it before you even consider doing a Zoom audition. Once you download Zoom (if you could get through this pandemic without already having it installed - congratulations!), you can simply start a new meeting any time, without any other participants. You can then record this meeting, and thus record yourself over Zoom. This is very informative. It’s the closest you will get to actually hearing what someone on the other end would hear.
Here’s the problem: When I heard myself over Zoom for the first time, I was about to cancel the audition. And no, it's not because I'm not used to hearing myself recorded. This is a fragment of the very first recording I made:
Anyone who knows anything about recording will know that the problem is the input volume. The microphone is simply overstimulated by the sound. After fiddling with all the sound settings on Zoom (like the ones everyone talks about: enabling original sound and turning down background noise canceling) I've found the input volume to be the single most important adjustment. If you are using your computer mic, chances are you will have to bring the input volume all the way down. Here is the best I could get the sound on Zoom with only the built-in mic:
According to outside listeners, this recording doesn’t capture the ring, the color, or the size of my voice. I’m not saying it doesn’t capture the voice at all, but I can only imagine how dramatic voices would fair under these conditions. What's more, the result is going to vary a lot depending on the exact computer you are using (I'm using a MacBook Pro), the acoustics of the space your are in, and your internet upload speed. The latest version of Zoom also has something called High Fidelity Music Mode but supposedly that only works if your upload speed is above 20Mbps (so I, for example, couldn’t use it.) Put a pin in internet speed...
Another consideration is the look of the space you are singing in. While I think having a “polished” look is often overestimated, it is a nice touch. So I cleared all clutter out of the view of the computer, which I had to place on my bookshelf. I placed a plant next to the piano to even out the shot. Even so, it didn’t look great. The white curtains of my window took up a disproportionate portion of the shot because I couldn’t get a better angle from the bookshelf. I also used some LED lights to light myself better. This is what my “shot” looked like (through Zoom) after all of that (I’m not in my audition attire, of course.) Does this look professional to you (attire aside)? 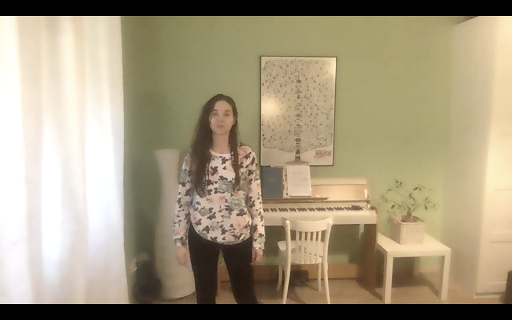