Being There: Thinking of Slouching Towards Bethlehem at the Aix-en-Provence Festival 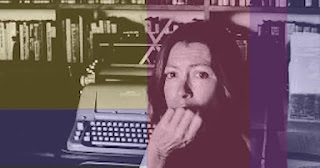 At the end of this June, I traveled to the Aix-en-Provence festival as one of nine young writers and opera makers to take part in a cultural journalism residency under the tutelage of critic Shirley Apthorp and dramaturge Willem Bruls. We spent six days attending the dress rehearsals of the 2021 festival program, writing about the productions, and talking about both the tradition and the future of opera.

I took Joan Didion’s collection Slouching Towards Bethlehem to Aix-en-Provence with me. The collection of magazine articles centers around the cultural void of Southern California in the 60s – neon signs, drugs, drive-through weddings, cheap diners - a stark contrast to the flamboyantly high-brow landscape of a prestigious opera festival in the French Provence – narrow Southern streets, open-air opera productions, tiny wobbling tables, old French couples in their countryside best. And yet there is also a parallel in the faded glory, glamour propped up by broken dreams, a Hollywood set, an opera set.

What about my broken dreams? I would think, unable to shake the perspective of an aspiring singer, as I watched the best opera makers of our times, the best singers, best conductors, best orchestras perform at one of opera’s most famous summer hubs. What about them? I went back and forth like that throughout my time there. There was often no other time to write except overnight. Sometimes, I wrote until 3a.m., which felt like heresy. It’s hard to shake that ascetic self-care of being a performer.

I found myself writing sentences like: “Whether opera, with its inherent artifice and melodrama, can truly provide catharsis for trauma is questionable.” The clunky attempt to avoid first person, the tossing up of an idea without providing a solution, the veiled blaséness of the statement – everything about it felt wrong. I confirmed for myself that I don’t want to be a critic, didn't see the point in writing about how something a team of artists poured their talent and experience into “just didn’t do it for me.”

I wasn’t alone in my ambivalence about writing reviews. The other protégés of the cultural journalism residency came from a diverse set of backgrounds – a dramaturg, a visual journalist, an opera director, a philosopher, a violinist and music facilitator, a journalist, a musicologist. Many of them did not wish to write reviews, either. There was a sense that it was time to move beyond that – take people back stage, educate audiences about the history of opera and how to understand it, create our own original productions inspired by our dramaturgical understanding of the art form.

On our last day, we met with the artistic director of the festival, Pierre Audi, a member of opera’s who’s-who with a deep resentment for critics. He green-lit a cultural journalism residency as a kind of ploy to raise a better generation of opera reviewers. He believed most opera critics didn’t have enough empathy towards the difficult process of putting on an opera and that criticism should be more connected to dramaturgy, as it was, in theory, at the residency. One of the questions we asked ourselves during our time in Aix was whether it was the opera critic’s job to understand the process of putting on a production, the politics of the theater, the personalities of the artists, or whether a critic should simply respond to the opening night. The problem was that even when we young participants in the cultural journalism workshop, many of us intimately involved with opera creation, were asked to talk about the productions we attended at the festival, all we did was quibble and criticize – sometimes it felt there was no other way to discuss opera.

But I don’t want to quibble. I just want to be there, the way Joan Didion was there. They say “there’s no there, there” in Hollywood, yet Didion captured something about that there, the desert, diners, and neon-signs, as much as the not there, the unattainable dream, the vibe. If Hollywood is both a there and a not there, so is opera. It’s an artform, not bound by time or place, and yet also a kind of there. Whether, like me, you’re attending the Aix-en-Provence festival or singing in a regional theater in a small Czech city, you are in some shared operatic space, which has its mores, its people, its landmarks. It can be observed, the way Didion observed the nowhere of Southern California in the 1960s.

“My only advantage as a reporter,” writes Joan Didion in her introduction to Slouching Towards Bethlehem, “is that I am so physically small, so temperamentally unobtrusive, and so neurotically inarticulate that people tend to forget that my presence runs counter to their best interests.” The opera world is small, and so I may never achieve that level of invisibility. It never ceases to amaze me that there is only one degree of separation between me and anyone else in opera. It’s frightening. One can never let one’s guard down. And there is a conspiratorial secrecy to being part of this club – there are things an opera insider says privately, and the promotional work one does for opera publicly. The whole thing seems to hold together with a web of strategic politeness, cold self-interest, and quiet resentment. Since Joan Didion observed the desert landscapes of her nowhere, the American entertainment industry has done plenty observing on the myth of Hollywood, however much this never changed its essence. Perhaps opera, or at least some of its constituents, can do the same.

“That is one last thing to remember,” writes Didion at the end of her introduction to Slouching Towards Bethlehem, “writers are always selling somebody out.”